Things have been very crazy around our house lately. We are going on a big trip Saturday, so we’ve been trying to plan as much as we can. (more on that later)
As if we had lots of extra time, we decided to make a real garden this year.Â  We would love to increase the amount of local and organically grown food we eat to decrease the amount of miles food is transported to us (read: emissions and resource consumption). Plus, who knows how old it is once it gets to the grocery?

We had just tomatoes two years ago, then tomatoes, a few pepper plants, and several herbs last year, but we’ve added more now! We bought a 4’x8′ raised bed kit at Gardens of Babylon at the Farmers Market. What we bought are two levels of non-chemically treated, locally cut cedar planks and a 1/2 ton of horse compost. Putting the bed together wasn’t too hard, but trying to get it level was very difficult in our sideways sloping yard. One of the levels was bowed, so we had an adventure trying to straighten it.

Once we finally got it together, we had to wait quite a while until it wasn’t so rainy before we could finally plant. But now, ta-da! 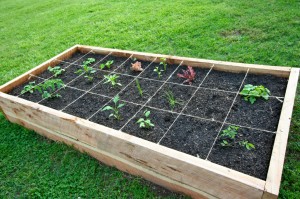 We semi-used a method called Square Foot Gardening to encourage ourselves to plant as many things as we could. There are a few empty squares, but they are near plants that might need more than 1 square foot. We planted tomatoes, peppers, onions, yellow squash, butternut squash, zucchini, jalapeÃ±o peppers, and lettuce. We’re a little late on the lettuce, but we’ll see how it goes. Here’s a picture of our little herb area. 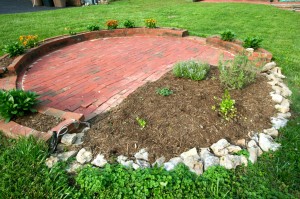 We had to put one tomato plant in there because they get so big. Peta satelit dunia . We’ve set up a water timer and soaker hoses to water while we’re gone, so hopefully all will go well. We’re excited to have some veggies, but it will be a while before they’re ready.