Last Saturday night, we made a paella. We love paella! 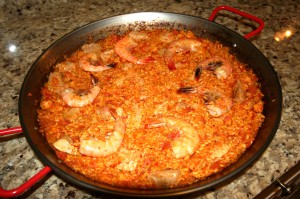 If you aren’t familiar with it, it’s a rice dish from the Valencia region of Spain. I’m not sure how we initially became interested, but I got a paella pan one year for Christmas so we could try. We’ve only done it a few times, as it’s fairly time and labor intensive and can also be expensive, depending on what ingredients you use.

Traditionally, paella is cooked on an outdoor flame. The other times we’ve made it, we did it on the stove, continually rotating it because the burners aren’t big enough for the pan. 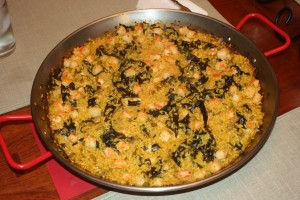 This time we tried it on our grill, and it was easier and turned out better. The other change this time was that we had real “bomba” short grain rice, which is hard to find here.

The first picture is the one we made this time, Golden Rice with Shrimp and Fresh Tuna. The second picture is another one we made, Scallop, Shrimp, and Seaweed Paella.