Finally, this post concludes our wonderful trip to South America!

We spent our last few days in the non-touristy but interesting capital of Peru: Lima. First things first…it was HOT there! I had to go to the store to buy shorts and a tank top (remember this is January). Second, since Lima is not a big tourist destination, we stood out, especially Joel. Some kids openly gawked at big blond Joel with his huge beard!

We took a highly-recommended private tour of the city, where we stopped at San Martin Square in the historic City Center. 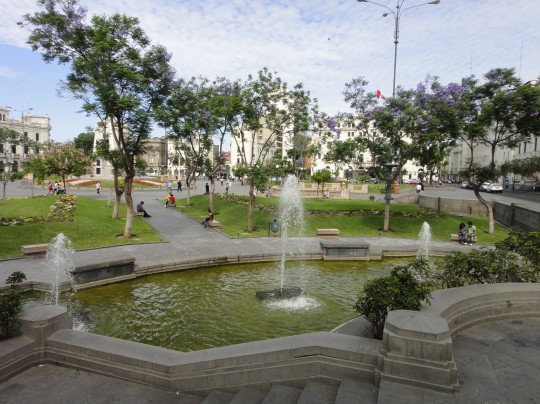 In the middle of the plaza is the monument to San Martin, the liberator of Peru. 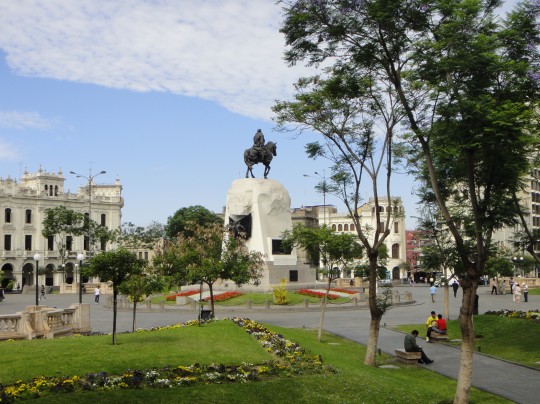 This is the front of the monument. Our guide told us a funny story: When the monument was being constructed, the sculptor was told to add a “llama” or flame to the top of the lady’sÂ  head. The sculptor thought they meant llama, like the animal (which is very important in Peru), so he put the animal on her head (look closely). I’m glad they kept it. 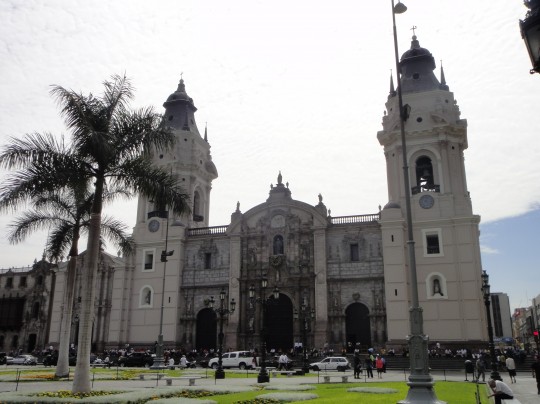 We toured the church of San Francisco and its catacombs, but you can’t take pictures inside: 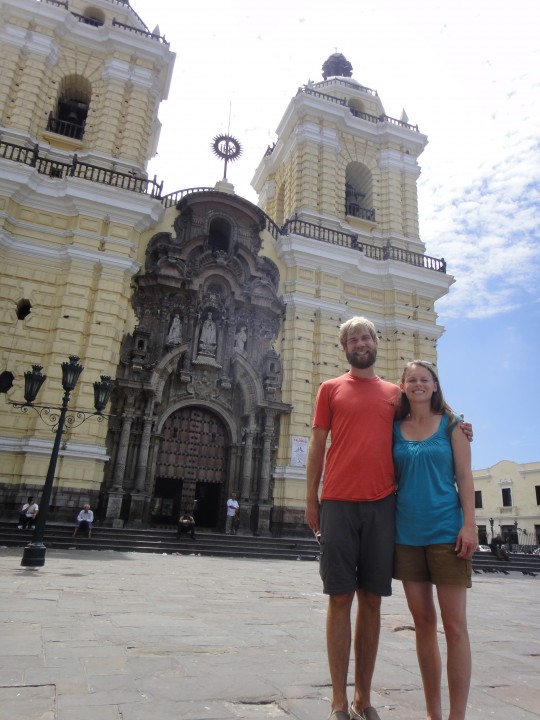 This is Love Park in Miraflores, where there are lovely mosaic benches, reminiscent of Park Guell in Barcelona. The sculpture behind us (“The Kiss”) was done by Victor Delfin, the owner of the bed and breakfast where we stayed. Also right after we took this picture, some guys jumped out of a van, ran up and painted some white paint on the black part of the sculpture then ran away. We had no idea what that was about…unfortunately it seemed like vandalism. 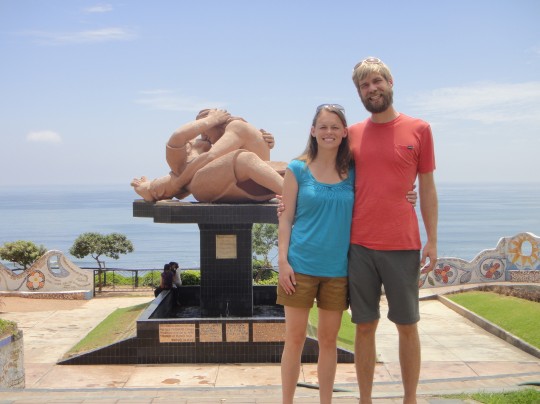 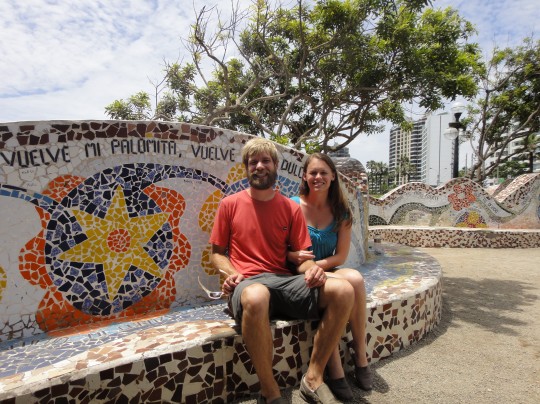 Lima is not known for its beaches by any means, but we spent a little time at the one down below where we were staying (upper left corner). At one point, we started counting the unbelievable number of items vendors tried to sell us while we sat there. It was quite the variety. 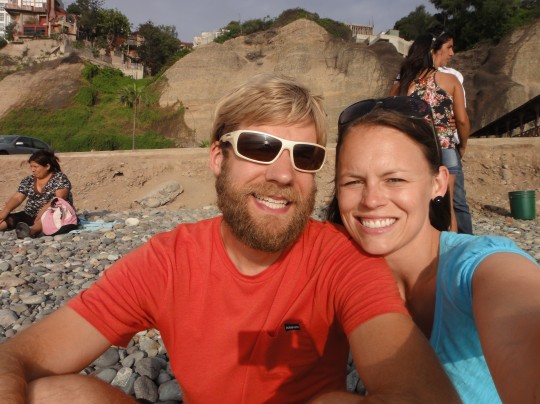 Joel took some time and did a little mountain biking (kind of funny since we live in CO, but he loved it). Side note: Notice that Joel has no beard in this picture. He couldn’t handle the beard in the heat, so we bought clippers at a store, and he shaved it. At least we own clippers now. 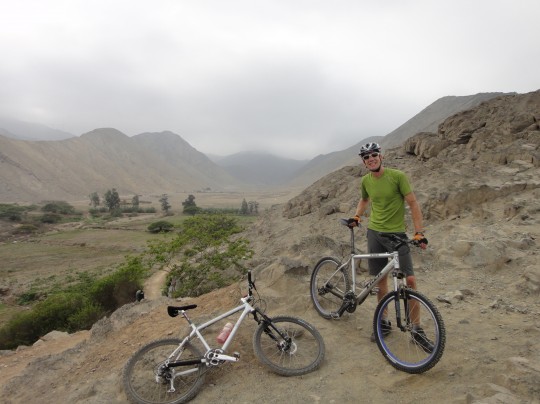 We visited the Larco Museum, where we saw a large collection of Pre-Colombian art and had a lovely lunch at their cafe. 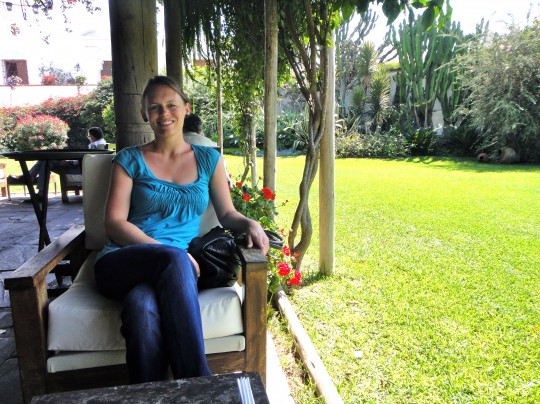 On our last night, we ventured to the very popular, almost locals-only Magic Water Circuit. This is an extremely cheap activity where you see maybe 20 large fountains lit up with different lights.Â  This was a fun night – a couple of girls asked to have their picture taken with us (you know, the gringos), and then later when we were looking at different areas, I found another girl getting her picture made with Joel. So funny…we figure we’re on someone’s facebook. 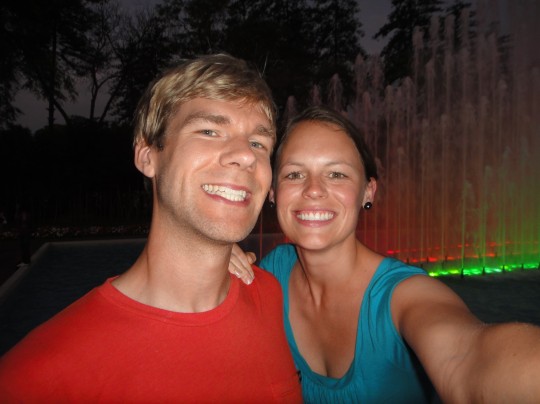 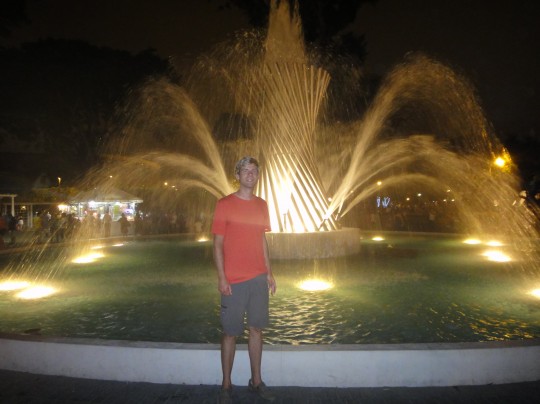 And thus concludes the amazing South American adventure. Special thanks to American Airlines for the free (plus taxes) flights and to Trip Advisor and random peoples’ blogs for helping us research. 🙂